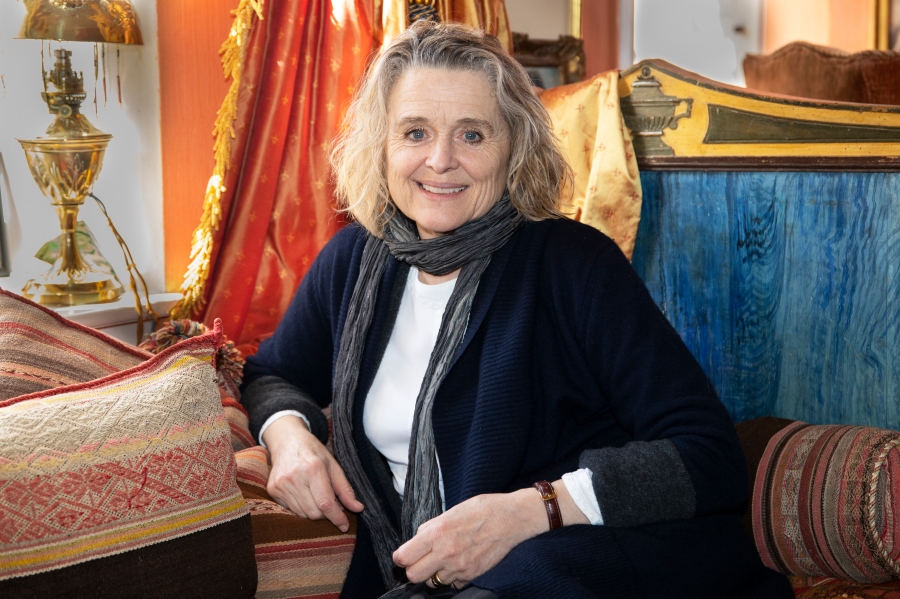 “The beauty of the hill sold it to me”

I was in born in 1948 in Dublin, the child of two actors whose parents were also actors. My grandparents were travelling players – they’d go to a different town every week.

I was brought up in a seaside town called Dalkey with my siblings. It was a fairly idyllic childhood. My dad was a well-known actor in Ireland; he was away a lot making films, so it was our mother really who ruled the roost.

I was educated through “As Gaeilge”,which is through the Irish vernacular. So, I was taught English through Irish. At age eleven I went to an English Convent boarding school, and then to the University College Dublin to read English Literature. I left three months before my finals, because I wanted to act. My parents were incandescent with rage. By then, I was a member of our National Theatre, the Abbey Theatre.

Then, when I was 21, I went over to England to seek my fortune. I started to work very quickly, television and film mainly, but all I wanted was to be a classical actress. It took years to get into the Royal Shakespeare Company, which was my top aspiration. My first production with them was called “London Assurance”. I took over from Judy Dench, as she was pregnant.

Directly opposite my stage door was another stage door, which was for a production called Godspell. The man who played Judas Iscariot was the man I married. From that point on, Jeremy and I fitted our careers around our family life. And after living in Islington and Hampstead, that is how we came to live in Watlington.

The reason we found Watlington is that we were doing a season in Stratford on Avon with the RSC (I was playing Lady MacBeth, and Jeremy was Leontes in The Winter’s Tale. We saw how our introverted little boy, Sam, flourished in the countryside – he started to play football and spend his time outside, like a country boy. Jeremy always wanted to move to the countryside, but I was so against it.  I thought I would stick out like a sore thumb as an Irish nationalist. We looked at houses up and down the M40, but I had something negative to say about every property.

Jeremy’s mother actually found this house – she lived in Nettlebed. She rang up one morning and said “I’ve found this house” – so I was pre-disposed to hate it. We drove over from Stratford, walked through the door and that was it. We knew this was our family home.

Initially, I did feel like the biblical “Ruth amidst the alien corn”, but it was really Rainbow Nursery and Debbie Hemmins, as well as meeting the mums at the primary school gate that made it happen. Linda and Steve Nicholson were so supportive and friendly, as were numerous other people, and then it started to work for me.

It was the hill that did it for me – that magical walk around it. That’s what led me to really love Watlington. The beauty of the hill sold it to me and made me feel like I could live here for the rest of my life.

What makes me love Watlington the way I do now, is what happens when you walk down the High Street. I walk down that High Street in awe. Robin has created a hub with the deli where everyone goes, and there is Amanda in the kitchen shop, and Tom in Calnans is so innovative. Zoe in Tutu Delicious – what an endeavour that is. The Co-op – it’s a village sport to complain about it, but it’s indispensable – I think we are bloody blessed. Kitty and Al in The Orange Bakery are literally the cherry on the cake. There’s always something new – Kitty is an inspiration. It’s just brilliant.

Max was two when we moved to Watlington and Sam was seven. In 1989, Jeremy was asked to play the father in Danny the Champion of the World, and he said, “I happen to have a nine-year-old son”, so they did a little screen test in the barn here, and he turned out to be a natural. I was very against it at first. But then my dad, Cyril Cusack, got the part of the doctor, so it was three generations, and I was persuaded. They offered me a one-line part of a woman pushing a pram, but I said no! It was all filmed locally, Turville, Hambleden, and Stonor and I am so glad they did it. The film was recently screened in Pyrton Village Hall. I was so charmed to see it again. I watch it through a mist of tears to see Sam who’s now 40, and my dad, who’s now passed, and Jeremy, looking so young and handsome. Well, he is still handsome!

We used to have lots of barn dances to raise funds for various charities, and I’m also very involved with a charity called Style Acre, which is based in Oxford. It’s the most extraordinary organisation, providing accommodation, support and activities for adults with physical or mental disabilities. We also helped raise funds for the skate bowl at the recreation ground through poetry reading evenings.

In Watlington, Jeremy and I do the Christmas raffle most years, and this Christmas Jeremy drove our horse and gypsy caravan down the High Street with Santa in it. Everyone crowded round and the caravan became Santa’s grotto. It was great fun.

I also have an Irish son from a former relationship, Richard, who is very much part of the family. He’s an MP in Ireland. Sam is a photographer now. And then, Max is the actor!

I am still working, and I am supposed to be doing a play with Max. The play is “The Contingency Plan” at the Donmar Warehouse in the West End, but it’s been cancelled because of the Corona Virus – I hope it will be rescheduled. I’ve also worked with my dad, and I did a play called “The Three Sisters” with my siblings. I’ve also worked with Jeremy a couple of times.

The hill is still my favourite place to go, and now we have the horse and cart, we are exploring the highways and byways around this area, which we love. We really feel part of the village.

Watlington Folk is a documentary project by photographer Nicola Schafer. Watlington is blessed with pretty buildings and beautiful countryside, however it is the people who live here that truly make the place. This project aims to capture that through a series of portraits of the people who live here together with their “Watlington Story”. For more information, please contact Nicola through her website http://www.nicolaschafer.co.uk

I live in Watlington with my partner, our two children and three chickens. I love our local shops, walking in our hills, and spending time on our allotment. I'm a founding member and co-chair of Watlington Climate Action Group and I work as a family and commercial photographer and film maker. View all posts by Nicola Schafer